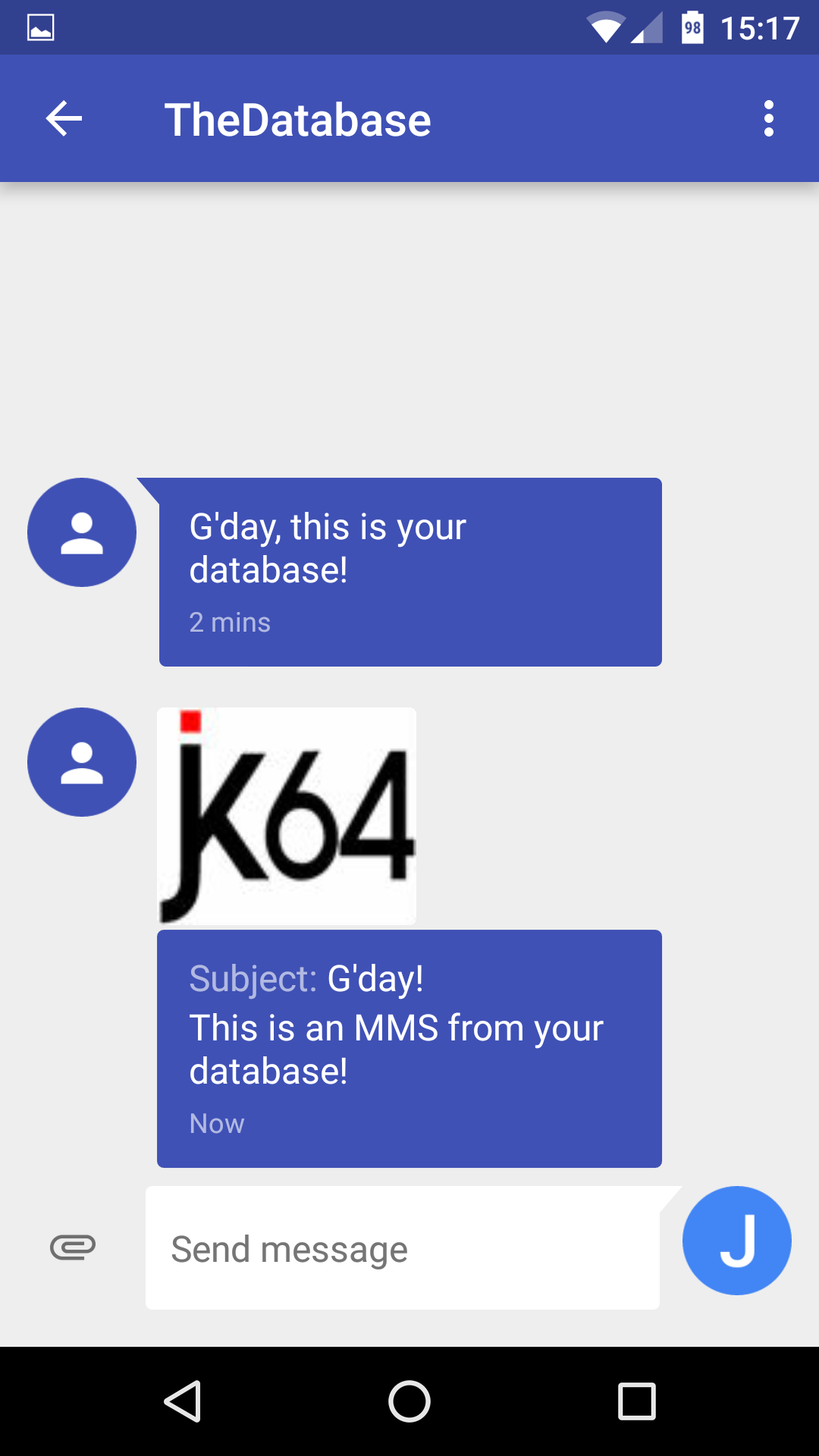 If you need to send almost any message to almost any phone from your Oracle database, and you want to use straight PL/SQL, you may want to consider using my Clicksend API.

I have released the first beta version of my Oracle PL/SQL API for Clicksend. Read the installation instructions, API reference and download the release from here:

Sending an SMS is as simple as adding this anywhere in your code:

All you need to do is signup for a Clicksend account. You’ll only be charged for messages actually sent, but they do require you to pay in advance – e.g. $20 gets you about 300 messages (Australian numbers). You can get test settings so that you can try it out for free.

I’ve been using Clicksend for years now, and have been satisfied with their service and the speed and reliability of getting messages to people’s mobiles. When I encountered any issues, a chat with their support quickly resolved them, and they were quick to offer free credits when things weren’t working out as expected.

If you want to send a photo to someone’s phone via MMS (although I’m not sure what the use-case for this might be), you need to first upload the image somewhere online, because the API only accepts a URL. In my case, I would use the Amazon S3 API from the Alexandria PL/SQL Library, then pass the generated URL to the clicksend API. There is a file upload feature that ClickSend provides, I plan to add an API call to take advantage of this which will make this seamless – and provide some file conversion capabilities as well.

You can send a voice message to someone (e.g. if they don’t have a mobile phone) using the Text to Voice API.

You have to tell the API what language the message is in. For a number of languages, you can specify the accent/dialect (e.g. American English, British English, or Aussie) and gender (male or female). You can see the full list here.

All calls to the send_sms, send_mms and send_voice procedures use Oracle AQ to make the messages transactional. It’s up to you to either COMMIT or ROLLBACK, which determines whether the message is actually sent or not. All messages go into a single queue.

You can have a message be scheduled at a particular point in time by setting the p_schedule_dt parameter.

All messages get logged in a table, clicksend_msg_log. The log includes a column clicksend_cost which allows you to monitor your costs. To check your account balance, call get_credit_balance.

Please try it out if you can and let me know of any issues or suggestions for improvement.

Sending emails from the Oracle database can be both simply deceptively braindead easy, and confoundingly perplexingly awful at the same time. Easy, because all you have to do is call one of the supplied mail packages to send an email:

If you want more control over your emails you can use UTL_SMTP instead; this is what I’ve been using for the past few years because I like feeling in control (doesn’t everyone?). This is the package that APEX_MAIL is built on top of.

If you just don’t trust these high-level abstractions you can use UTL_TCP and interact directly with the mail server. I don’t know, maybe your mail server does some weird stuff that isn’t supported by the standard packages.

If you want to send attachments, you can build this yourself in UTL_SMTP or UTL_TCP, but it’s easier with APEX_MAIL which can send BLOBs. UTL_MAIL can send attachments but only up to 32K in size (half that for binary files which become base64 encoded).

Let’s make up a checklist of features supported out of the box (i.e. without requiring you to write non-trivial code) and see how they stack up:

Features marked “No*”: these are not natively supported by the API, but generic API routines for sending arbitrary data (including RAW) can be used to build these features, if you’re really keen or you can google the code to copy-and-paste.

(Note: of course, you can add the Asynchronous and Rate limiting features to any of the UTL_* packages by writing your own code.)

Calls to the API to send an email do not attempt to connect to the mail server in the same session, but record the email to be sent soon after in a separate session.

Sending an email within an organisation is easy; internal mail servers don’t usually filter out internal emails as spam. Sending an email across the internet at large is fraught with difficulties, which can rear their ugly heads months or years after going live. One day your server tries to send 100 emails to the same recipient in error, and all of a sudden your IP is blocked as a spammer and NO emails get sent, with no warning.

For the last two years I’ve been battling this problem, because my site allows my clients to broadcast messages to their customers and partners via email and SMS. The SMS side worked fine, but emails frequently went AWOL and occasionally the whole site would get spam blocked. Most emails to hotmail went into a black hole and I was always having to apologise to anyone complaining about not getting their emails – “You’re not using a hotmail address by any chance? ah, that’s the problem then – sorry about that. Do you have any other email address we can use?”

I added some rate-limiting code to ensure that my server trickled the emails out. My server was sending about 2,000 to 3,000 per month, but sometimes these were sent in short spikes rather than spread out over the month. My rate-limiting meant a broadcast to 200 people could take several hours to complete, which didn’t seem to bother anyone; and this stopped the “too many emails sent within the same hour” errors from the mail server (I was using my ISP’s mail server).

I managed to improve the situation a little by implementing SPF (Sender Policy Framework). But still, lots of emails went missing, or at least directly into people’s spam folders.

I looked into DKIM as well, but after a few hours reading I threw that into the “too hard basket”. I decided that I’d much prefer to outsource all this worry and frustration to someone with more expertise and experience.

Searching for an Email Gateway

I’ve been hosting my site on Amazon EC2 for a long time now with great results and low cost, and I’ve also been using Amazon S3 for hosting large files and user-uploaded content. Amazon also provides an Email Gateway solution called SES which seemed like a logical next step. This service gives 62,000 messages per month for free (when sent from an EC2 instance) and you just get charged small amounts for the data transfer (something like 12c per GB).

I started trying to build a PL/SQL API to Amazon SES but got stuck trying to authenticate using Amazon’s complicated scheme. Just to make life interesting they use a different encryption algorithm for SES than they do for S3 (for which I already had code from the Alexandria PL/SQL library). It was difficult because their examples all assumed you’ve installed the Amazon SDK.

It always rejected anything I sent, and gave no clues as to what I might be doing wrong. In the end I decided that what I was doing wrong was trying to work this low-level stuff out myself instead of reusing a solution that someone else has already worked out. A good developer is a lazy developer, so they say. So I decided to see what other email gateways are out there.

I looked at a few, but their costs were prohibitive for my teeny tiny business as they assumed I am a big marketing company sending 100,000s of emails per month and would be happy to pay $100’s in monthly subscriptions. I wanted a low-cost, pay-per-use transactional email service that would take care of the DKIM mail signing for me.

In the end, I stumbled upon Mailgun, a service provided by Rackspace. Their service takes care of the DKIM signing for me, do automated rate limiting (with dynamic ramp up and ramp down), it includes 10,000 free emails per month, and extra emails are charged at very low amounts per email with no monthly subscription requirement.

Other benefits I noticed was that it allows my server to send emails by two methods: (1) RESTful API and (2) SMTP. The SMTP interface meant that I was very quickly able to use the service simply by pointing my existing APEX mail settings and my custom UTL_SMTP solution directly to the Mailgun SMTP endpoint, and it worked out of the box. Immediately virtually all our emails were getting sent, even to hotmail addresses. I was able to remove my rate limiting code. Other bonuses were that I now had much better visibility of failed emails – the Mailgun online interface provides access to a detailed log including bounces, spam blocks and other problems. So far I’ve been using it for a few weeks, and of 2,410 emails attempted, 98.55% were delivered, and 1.45% dropped. The emails that were dropped were mainly due to incorrect email addresses in my system, deliberately “bad” test emails I’ve tried, or problems on the target mail servers. One email was blocked by someone’s server which was running SpamAssassin. So overall I’ve been blown away by how well this is running.

Once I had my immediate problem solved, I decided to have a closer look at the RESTful API. This provides a few intriguing features not supported by the SMTP interface, such as sending an email to multiple recipients with substitution strings in the message, and each recipient only sees their own name in the “To” field. My previous solution for this involved sending many emails; the API means that I can send the request to Mailgun just once, and Mailgun will send out all the individual emails.

Another little bonus is that Mailgun’s API also includes a souped-up email address validator. This validator doesn’t just check email addresses according to basic email address formatting, it also checks the MX records on the target domain to determine whether it’s likely to accept emails. For some domains (such as gmail.com and yahoo.com) I noticed that it even does some level of checking of the user name portion of the email address. It’s still not absolutely perfect, but it’s better than other email validation routines I’ve seen.

Mailgun also provide a jQuery plugin for their email address validator which means you can validate user-entered email addresses on the client before they even hit your server. To take advantage of this in Oracle APEX I created the Mailgun Email Validator Dynamic Plugin that you can use and adapt if you want.

If you follow me on twitter you are probably already aware that I’ve started building a PL/SQL API to make the Mailgun RESTful API accessible to Oracle developers. You can try it out for yourself by downloading from here if you want. The WIKI on Github has detailed installation instructions (it’s a little involved) and an API reference.

The API Reference has a lot more detailed examples.

My implementation of the Send Email API so far supports the following features:

Features marked “Yes*”: these are provided by the Mailgun service by default, they are not specific to this PL/SQL API.

I’m planning to add more features to the API as-and-when I have a use for them, or if someone asks me very nicely to build them. I’ll be pleased if you fork the project from Github and I welcome your pull requests to merge improvements in. I recommend reading through the Mailgun API Documentation for feature ideas.

If you use either of these in your project, please let me know as I’d love to hear about your experience with it.

This article was not solicited nor paid for by Mailgun. I just liked the service so I wanted to blog about it.