I had an interactive report an an old APEX application that I’ve kept maintained for quite a few years, which is able to show an Icon View that shows a thumbnail of the image for each item.

The problem was that the layout sometimes went wonky depending on the size of the image or the size of the label text. How the items were laid out depended on the width of the viewing window as well. I have set Columns Per Row to 5, and I’m using a Custom Icon View with the following Custom Link:

Each item shows an image, scaled down to width 140 pixels (my images come in all sorts of sizes), plus the title; either the title or the image may be clicked to open the details for it.

This is how it looked:

Depending on a number of variables (length of the label text, and the width of the viewing window) some rows would show their first item in the 5th column instead of over on the left; this would have a run-on effect to following rows. In addition, I wasn’t quite happy with the left-justified layout for each item.

To fix this I added some DIVs and some CSS. My Custom Link is now:

The width attribute is no longer needed directly on the img; instead, I added the following CSS to the region Header Text:

Some of the key bits here are that the container div has width and height attributes, and the image is constrained using max-width, max-height, width:auto and height:auto. Also, the work title is constrained to a 40 pixel high block, with overflow:hidden.

The images are scaled down automatically to fit within a consistent size, and both the images and the labels are horizontally centered leading to a more pleasing layout. If an image is already small enough, it won’t be scaled up but will be shown full-size within the available area. Also, the label height is constrained (if an item label is too high the overflow will be hidden) which solves the layout problem I had before. If the image is not very tall, the label appears directly beneath it which is what I wanted.

The only remaining issue is that the icon view feature of the interactive report generates a table with rows of a fixed number of columns (5, in my case), which doesn’t wrap so nicely on a small screen when it can’t fit 5 in a row. I’ve set Columns Per Row to 1 now, and it seems to wrap perfectly; it shows up to a maximum of 6 items per row depending on the viewing window width.

Thanks to Matt (see comment below) who pointed out that a report like this would benefit greatly from a Lazy Load feature to reduce the amount of data pulled to the client – for example, if the user requests 5,000 records per page and starts paging through the results, each page view could potentially download a large volume of data, especially if the images are quite large.
I’ve implemented this now and it was quite straightforward:

This was an important addition in my cases as some of the images were quite large; I don’t have to worry about load on my server because they are hosted on Amazon S3, but I do have to pay a little bit for the transfer of data.

The users complained that they currently have to click each link to drill down to the detail records to find and fix any errors; they wanted the screen to indicate which detail records were already fine and which ones needed attention.

Since screen real-estate is limited here, I wanted to indicate the problems by showing a red edit link instead of the default greyscale one; since this application is using an old theme I didn’t feel like converting it to use Font Awesome (not yet, at least) and neither did I want to create a whole new image and upload it. Instead, I tried a CSS trick to convert the greyscale image to a red shade.

I used this informative post to work out what I needed: http://css-tricks.com/color-filters-can-turn-your-gray-skies-blue/

WARNING: Unfortunately this trick does NOT work in IE (tested in IE11). Blast.

Firstly, I added a column to the underlying query that determines if the error needs to be indicated or not:

I set the new column type to Hidden Column.

The link column is rendered using a Link-type column, with Link Text set to:

I changed this to:

What this does is if there is an error for a particular record, the class "btnerr" is added to the img tag. Rows with no error will simply have class="" which does nothing.

Now, to make the greyscale image show up as red, I need to add an SVG filter to the HTML Header in the page:

I made up the values for the R G B lines with some trial and error. The filter is applied to the buttons with the btnerr class with this CSS in the Inline CSS property of the page:

The result is quite effective:

But, as I noted earlier, this solution does not work in IE, so that’s a big fail.

NOTE: if this application was using the Universal Theme I would simply apply a simple font color style to the icon since it would be using a font instead of an image icon.

Getting older, it’s getting harder to see and click those tiny checkboxes… 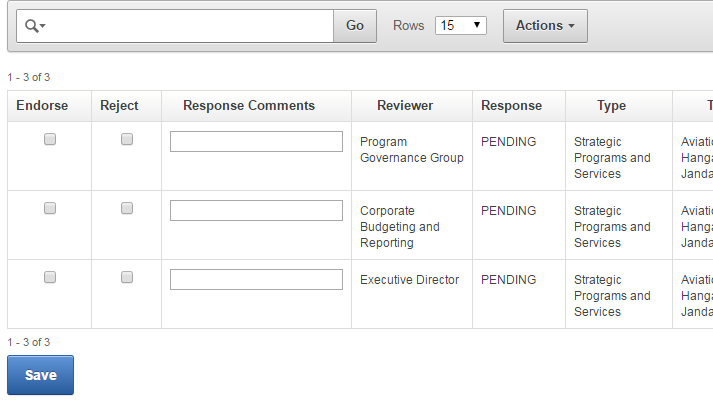 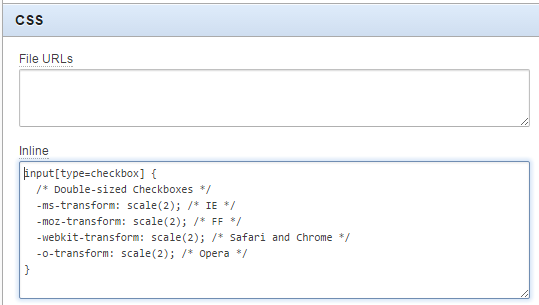 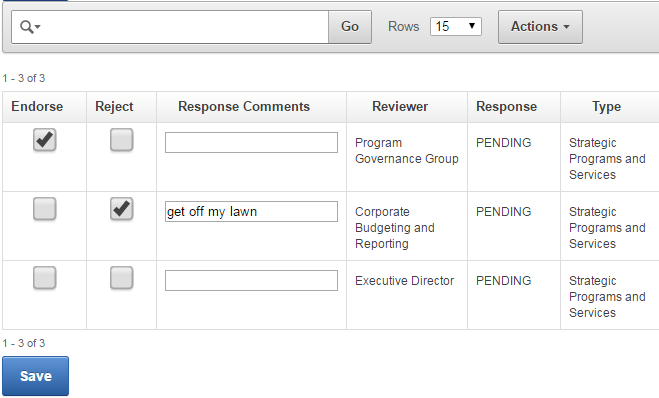 CAN YOU SEE THEM NOW? Ah, good. That’s all right then.

Brought to you by dept-of-coding-by-copy-and-paste.