While they’ve dropped support for IE 6, it does mention that you can still develop applications that will work perfectly well on the older version. Also, it’s good to see Oracle officially supporting more browsers, including Chrome. I’ve been using Chrome to develop APEX applications for quite a while now, and the only problem I’ve encountered is that the procedure editor wouldn’t work. I’ve tried it in APEX 4.0 using EPG and it seems to work fine – so that’s good. I doubt APEX will ever really replace SQL Developer but it’s already useful for many development and maintenance tasks. 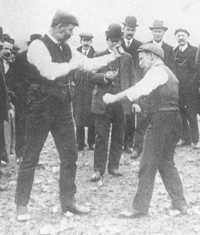 I just wanted to bring attention to some very interesting discussion (that’s been going on for years now) regarding Table APIs (TAPI) versus Transactional APIs (XAPI). Some very nice answers, as well as a bit of controversy 🙂 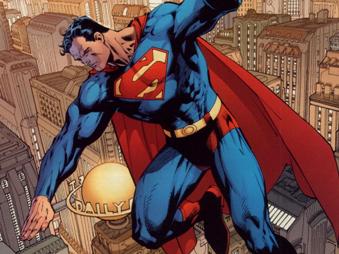 For too long I’ve muddled my way through using the built-in “explain plan” feature of the IDE-that-shall-remain-nameless provided by the client; but now that they’ve successfully upgraded from 9i to 11g, I’m now in a much better place. No longer will I wonder which table each step in a plan refers to, or what filters are being applied where.

Steven Feuerstein lists seven excellent “Golden Rules” in his presentation (via Eddie Awad) and says “Don’t repeat anything. Aim for a Single Point of Definition for every aspect of your application – formulas, business rules, magic values, SQL statements.” giving the following code as exhibit A: 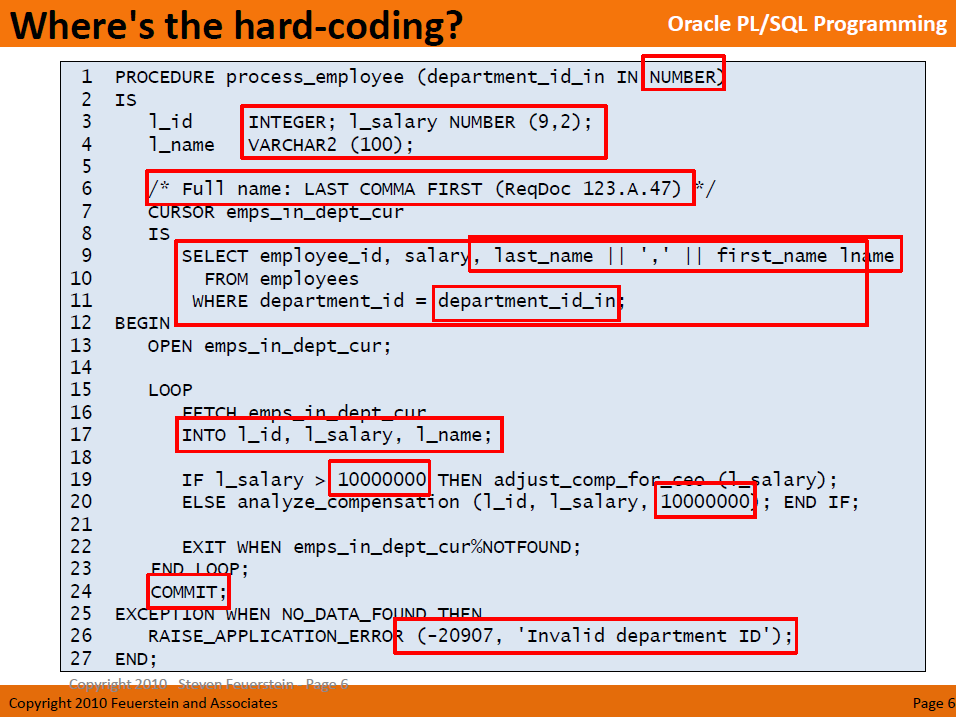 I’m guessing in his presentation he spoke about various things that could be done to improve this code, but they’re not in the PDF; so I’d like to give it a go myself and see how much we can improve the maintainability of this code by reducing hard-coding.

Instead of declaring parameters and variables as NUMBER, VARCHAR2 etc, these should use the %TYPE operator so that they are automatically synchronized with the datatype from the table columns they represent:

l_name, however, is not based on any table column we know of at this point; so there is no %TYPE we can use for it. But bear with me, we’ll fix this later.

This one’s a no-brainer: that “10000000” is obviously a magic value that some bean-counter decided was the correct threshold for the CEO’s salary. Whatever.

You might define this as a constant defined in a global package specification, e.g.

Personally, I’d suspect that the business will review and revise this number from time to time, to keep up with inflation; so we might end up needing a database table to store the current threshold, plus a date range for which the threshold applies. I’d then add an interface on top of this table so that queries and procedures don’t need to know how to get the current threshold. We can retrofit this later by changing ceo_salary_threshold into a function instead of a constant. That’s a bit beyond the scope of this exercise, however.

The rule about formatting an employee name as “LAST,FIRST” is duplicated in a comment and in the SELECT statement; and chances are it will be required elsewhere in the application as well. My preferred method for creating a SPOD for this sort of business rule used to be to move the implementation into a view, e.g.:

This view is what I like to call a “formatting” view: it is only allowed to query one table, it contains no WHERE, GROUP BY or HAVING clauses, and it selects all the columns from the table. The view can be used almost anywhere the table may be used. It adds additional columns that format the data in various ways. If need be, we can even add INSTEAD OF triggers to handle inserts/updates on the derived columns – if the business rules make the conversion from derived-to-underlying-column well defined.

So, now we can redefine the cursor as:

Notice that I don’t call the column “last_comma_first” or anything like that – that would again be hard-coding the business rule, which would then be replicated throughout the application. In Oracle 11g, however, I think it might be better to create virtual columns on the table instead:

The virtual column can have its own stats, and even an index if needed for querying.

Another option would be to create a function that does this formatting:

We could call this function from the procedure or the view, but if we’re on 11g there’s no reason we can’t create a virtual column on it:

Another advantage to using the view or a virtual column is that we can now remove the “VARCHAR2 (100)” from the variable declaration, e.g.:

The cursor refers directly to the parameter to the procedure, which is a no-no – this couples the cursor too much with the procedure, i.e. we can’t re-use it elsewhere unless we always define a variable “department_id_in”. Instead, we should use a cursor parameter:

The addition of the context “emps_in_dept_cur.” is not strictly necessary, but it is good practice to define the scope of all variables so that unrelated changes (e.g. the addition of a column called “department_id_in”) don’t change the code.

What if we need to add 10 more columns to the cursor? At the moment we’re adding one more variable for each column of the cursor, and specifying it three times (variable declaration, cursor SELECT clause, and the FETCH INTO). We can reduce this to just once by declaring a cursor row type instead:

Procedures should rarely COMMIT (there are very few exceptions to this rule, e.g. procedures declared as autonomous transactions). Transactional control should be left to the calling process – this process might need to be done along with a number of other changes elsewhere, and we would want to either COMMIT or ROLLBACK all the changes together as one transaction. What if the next procedure raised an error and we had to rollback? Our system would be left in an inconsistent state.

That RAISE_APPLICATION_ERROR hard-codes an error code and an error message. What if we type the error number wrong somewhere? If the calling process handles ORA-20907 in some fashion, but we mistype it as -20908 in one procedure, the calling process will not handle it.
We could declare an exception instead, e.g. in a global package specification:

Now, our exception handler can raise just the one exception:

However, we’ve now lost the error message. It would be better to create an error-handling package instead:

EDIT: PRAGMA EXCEPTION_INIT only accepts literal numbers for its second parameter (or else you get PLS-00702 at compile time) – fixed accordingly

One final change that one might make here is to move the SQL query right out of the procedure and use a ref cursor instead, supplied by a central “employee_cursor” package.

There are probably plenty of other changes we could make to improve the maintainability of this code further.
What do you think?